It’s been way too long again, and life has been super busy. Since my last post, I left my retail job, moved to London, and started a PR internship. From November, I didn’t have any time for gaming, as I was concentrating so hard on doing well at the internship, which would hopefully turn into a full time, permanent position. Thankfully, from January 5th 2015, I am a permanent, full time graduate trainee, and I’ve started to make some time for my favourite things again. Of course one of those things is video games.

And now that Christmas has been and gone, new games have made their way into my life, and for the first time in a while I’m trying to make my way through one game before moving onto another, and Tales of Hearts R is that game at the moment.

Tales of Hearts R has really taken me by surprise. I’m a fan of the Tales of series anyway, but there’s something special about this one. One of the things I’ve noticed, is that I’m actually using the battle system properly, instead of just button bashing. In the past, I have never used the guard function, so I just went in all guns blazing, and it usually worked in my favour. However, this time I find myself guarding a lot more often as it has a real function, instead of just reducing damage.

The story is also pretty damn good too. It’s totally generic, and the characters are huge JRPG stereotypes, but I’m absolutely fine with that. Readers of this blog will know that I’m a sucker for an old school JRPG, and this serves old school style up in droves. I’ve not been bored for a single moment, and even the random encounters battle system hasn’t frustrated me too much. The character conversations are cheesy, but I’m genuinely invested in how party relationships are evolving.

I’m about 15 hours into the game at the moment, and it’s showing no signs of slowing down. If you’re a fan of classic JRPGs, and are looking for a great PS Vita game, you can’t go wrong with Tales of Hearts R. Unfortunately the DLC is ridiculously expensive at £7.99 for each set of costumes, but the outfit additions you get throughout the game satisfies the need for humorous character customisation, without the hefty price tag.

Other games I got for Christmas were Borderlands The Pre Sequel and Danganropa Trigger Happy Havoc. After I finish Tales of Hearts R, I’m planning to move onto Danganropa, as it’s something I can dip in and out of on the way to and from work.

Am I missing any amazing games on the PS Vita? Let me know in the comments!

As you will all know I have been waiting quite some time for Persona 4 Arena to come out. Since it got cancelled again I got rather annoyed. It was two days before the release of Borderlands 2, and my brain said to me ‘Sod it, get Borderlands 2 instead’. It’s not that buying it hadn’t entered my mind before, I just wasn’t sure whether I would have the time to engross myself in it before starting back at university this week.

I’m very glad that I waited until now to write these ponderings. I’ve had about a 5 hour session on Borderalnds 2 this morning (since I am ill in bed, what else was there to do?) and my thoughts have changed. In a good way, of course.

Borderlands 2 as a sequel isn’t as good as its predecessor. If you take into account the originality, the humour and the general mayhem of the first one, then Borderlands 2 just feels a bit like a huge DLC add on. I think the thing here, for me at least, is that the world of Pandora was just so beautiful and original, that the magic was mostly used up with the first game. Don’t get me wrong, I’m really enjoying all the characters and locations but there’s just something about it that isn’t quite so ‘Holy crap amazing!’ as it was before. Familiar faces crop up all over the place, including the original vault hunters, but these are kind of the things that make it all a bit too familiar for my liking. Dr Zed is there, Marcus is there, and of course our beloved Claptrap is there. Taking Borderlands 2 as a stand alone game however is a completely different kettle of fish. 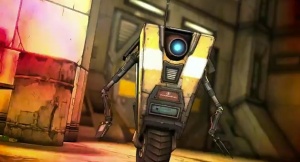 Borderlands 2 is seriously good fun despite what I have just said above. I’ve been playing for probably about 20 hours now, and I have constantly had the ‘I’ll just do this mission, then I’ll turn it off’ syndrome. There is so much to do, and so much loot to grab that it really is very difficult to turn the Xbox off and go back into the land of the living. When I was making my lunch earlier I looked out the window and could have sworn I saw a red light in the distance (indicating a gun/shield/mod etc) but then remembered I was in the kitchen, and not playing the game. I keep expecting people to walk into the room and have a slow motion snap shot of themselves with some form of comedic cover text. Yes, it’s bad, but I suppose that makes the game a success. It’s on my mind all the time, to the extent where I think I am actually IN the game.

I love the new additional leveling system. Well, it’s not a leveling system, but it’s a new method of pimping out certain aspects of your character. Remember the challenges from Borderlands? Well, that’s now turned into a Badass Rank system. For every challenge you complete, you earn a badass rank (or ten), and when you reach a certain rank, you get a badass token. These tokens are used to increase health, shield capacity, gun damage etc. I just think it’s a really clever way to customise your character. There is still the main leveling system of course, which can be a bit of a fiend. Just let me say this; Don’t be a jack of all trades, it’s impossible.

My main issue with Borderlands 2 however is this; It’s too damn hard to play on your own. Yes, I hear you telling me it’s designed to be played co-op, but the original game was nowhere near as difficult as this to play on your own. I don’t like playing co-op. Call it my anti social nature, but I just want to shoot things and get out. Gaming for me is a very personal experience, and I don’t want someone else running around in my game shooting and looting, and getting all of the experience that I would otherwise have had. Yeah it would be nice to have someone a couple of levels higher to help me out when I am struggling to take down a strong enemy, but then my sense of pride kicks in. I would rather just be re-spawned and it cost me a bit of cash than have my gamers pride damaged.
I suppose it’s all down to personal play style at the end of the day. I’m a single player kind of girl, whereas other people want to play in a team. If I want to have some form of social interaction while playing Borderlands I’ll just call my boyfriend and shout ‘OH SHIT! GRENADE!’ and ‘HOLY CRAP RUN!’ at him, without  being judged (I hope).

The thing I am most excited for is the Mehcromancer character class. It should be available soon, and she looks completely awesome and kick ass. Bring on the customisation!

If you enjoyed the original Borderlands then I would definitely suggest getting Borderlands 2, just prepare to not be blown away by many new and exciting things, and also be expected to have your play-style challenged.

To end, some shameless self promotion! Please check out my sister blog Ramblings of a Crazy Train Lady if you are interested in my personal goings on and obscure travel stories. I literally just started it the other day so there’s only one post, but I promise regular snippets. This is basically just to keep my personal life there, and my gaming life here.

Thought I had better let everyone know where on earth I have been over the past week or so. Life has been busy due to my becoming 21 today, sorting out my party on Saturday, and staying with relatives over the weekend. I haven’t even had time to play much of Fallout New Vegas, and that arrived a week ago today! I have been bombarded with a collection of PS games to have a mooch at as well, so hook me up to a gaming drip for the next month. Assassins Creed Brotherhood is happening in the middle of November, so I need to crack out and bash out my New Vegas Review which will be uploaded here a week after it has had it’s run on TIMJ. I’ve also been given 2100 MSP from the parents, so those will be going on the Claptrap DLC for Borderlands, and the Undead Nightmare DLC for Red Dead Redemption. So many games, so little time!

A proper post when birthday celebrations have come to an end and I have both the time and sobriety to write something interesting and comprehensive. To end, have a picture of myself, my delightfuly large badge from work and Fable 3 which arrived today. Good times? I think so! 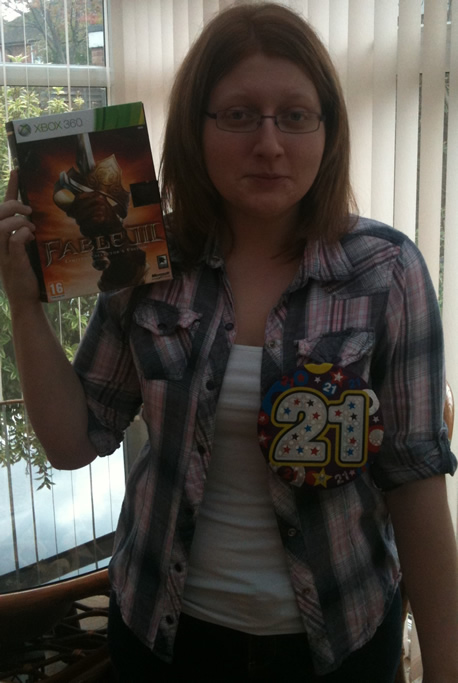